Victor de Sabata (1892-1967)
Forgotten as a composer. Tyrannical personality on the podium, more celeb in opera. His 1953 Tosca remains one of the most famous opera recordings.
his first recording was Richard Strauss’ Death and Transfiguration (1930).

Paul Sacher (1906-1999)
A swiss conductor and patron. Began conducting in 1926, founding at the same time the Basel Chamber Orchestra.
Began recording in 1930 (Praetorius & Bach). On of his last ones was Henze musics for DGG. He recorded Stravinsky’s violin concerto with Mutter.

Kurt Sanderling (1912-2011)
Until the wall fall, conducted mainly in the East. Philippe Entremont told me he was the best conductor he had to play with and he played with so many. His complete Sibelius symphonies are still acclaimed.
One of his first recordings was Rachmaninoff’s 1st piano concerto with S. Richter (1955). One of his last ones was Bruckner’s Symphony n° 7.

Malcom Sargent (1895-1967)
A pianist and organist in his youth, even played Rachmaninoff’s 1st piano concerto under Boult. Can’t resist to put this sleeve on the left. One of his first recordings was Beethoven’s 5th piano concerto with Arthur Schnabel (1938).

One of his last ones was Walton’s 1st 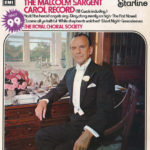 symphony. He recorded a lot of Gilbert & Sullivan…

Wolfgang Sawallisch (1923-2013)
Began the piano at 5 and remained an appreciated accompanist (gave pianos recitals with Kubelík).
His first recording was Tchaikovsky’s 1st piano concerto with Conrad Hansen (1953). He recorded Schubert’s chorus and masses with the Bavarian Radio chorus.

Herman Scherchen (1891-1966)
First a viola layer, his first concert as a conductor was with the Berlin Philharmonic, and the same year – 1911 – prepared Schoenberg’s Pierrot lunaire for performances with the composer. A champion of modern music, he was also famous for his Bach transcriptions readings. His Beethoven interpretations have been praised. One of his numerous recordings was Mahler’s 8th symphony in 1951. On of his last ones was Offenbach’s overtures… (1965). He created Déserts by Varèse in 1954.

Thomas Schippers (1930-1977)
First a pianist and organist. Active in both symphonic and operatic fields. HIs first recording was the creation of the first opera for TV:  Menotti’s Amahl and the Night Visitors (1954). One of his last ones was a Richard Strauss program.

Hans Schmidt-Isserstedt (1900-1973)
First a violinist. The British occupation asked him to form the Nordwest Deutsche Rundfunk Symphony orchestra in Hamburg in 1945 which he will conduct until 1971. On of his first LPs was Stravinsky’s Capricio with Monique Haas. His last one was Brahms’ 1st piano concerto with Alfred Brendel. His complete Beethoven symphonies in Vienna remain famous.

Carl Schuricht (1880-1967)
Conducted modern music in his youth but then specialized in classical and romantic repertoire. On of his first recordings was Beethoven’s 5th symphony in Paris (1949). His last one may be Bruckner’s 8th symphony in Vienna.

Claudio Scimone (1934-2018)
Founded in 1959 I Solisti Veneti, performing music from Italian baroque masters, though many contemporary composers dedicated pieces to him. his first recording was Verdi’s  quartet (1963).

Tullio Serafin (1878-1968)
First a violinist in La Scala orchestra, he will conduct mainly opera.
His first recording was Verdi’s Aida (1951), one of his last Il Trovatore. His Otello recording remains famous.

Constantin Silvestri (1913-1969)
This Romanian conductor was firstly a pianist and a composer. He left Romania in 1957 and was appointed principal conductor of the Bournemouth Symphony orchestra (1961-9). An impressive conductor who often arranged scores.
His first recording was Mozart’s Symphony n° 27 in Prague (1953) * See the interesting comment at the end of the page). One of his last may be Shostakovitch’s 5th symphony in Vienna.

Stanisław Skrowaczewski (1923-2017)
Began composing at the age of 5. Wounded, had to give up a pianist career. After conducting in Poland, joined the Minneapolis Symphony orchestra in the 60s.
His first recording was a Schubert program (1960).  His last one Bruckner’s 3rd symphony live in London (2015). e recorded Chopin’s works for piano and orchestra with Alexis Weissenberg.

Georg Solti (1923-1997)
(György Stern) This Hungarian born conductor was firstly a pianist. During the War, he had been invited by Toscanini to assist him for the Lucerne festival, along with Bruno Walter and Adolf Busch. Took over the Chicago Symphony orchestra in 1969 (with Giulini at the beginning).  His first LP was Haydn’s 103rd symphony. His last one was a Renée Fleming recital. He was famous for his Wagner’s Ring in Vienna. I’m a Kubelík fan in Mahler but always liked Solti’s Mahler 1rst symphony (first version) which I acquired in my youth.

Leopold Stokowski (1882-1977)
Studied violin and piano and became for sometime organist in London. After Cincinnati, he took over the Philadelphia from 1912 to 1936. He was celeb for the sound he could produce with an orchestra and for his many creations. Began recording in 1912… (“Festival at Bagdad”…). One of his last ones may be Sibelius’ 1st symphony. His Rimsky-Korsakov’s Easter Overture is irresistible.

Otmar Suitner (1922-2010)
First a pianist, conducted worldwide, both in opera and symphony. One of his first recordings was Grieg’s Peer Gynt (1953). He was an appreciated Wagnerian conductor.

Walter Susskind (1913-1980)
First a pianist, he was Born in Prague. Conducted in Great Britain then in the US.
One of his first recording was Liszt’s 2nd piano concerto with Witold Malcuzynsky (1949). One of his last ones was Mahler’s Das Lied von der Erde. He was appreciated for his Central Europe musics interpretations.

Evgeny Svetlanov (1928-2002)
For me the best Russian conductor, he was also a talented pianist and a composer (traditional). Recorded almost all the Russian repertoire. his first recording in 1958 was an opera by Alexandre Dargomyjski. His Scriabin’s Poem of Ecstasy remains an experience. He did for me the best complete symphonies by Tchaikovsky (Canyon, not available on platforms).

Hans Swarowsky (1899-1975)
This Hungarian studied in Vienna with Schoenberg, Webern and R. Strauss. Known for having taught conducting to Abbado and Mehta. Stayed mostly in Vienna were he was active in opera and symphonic fields.
His first recording was Haydn’s Orfeo Ed Euridice (1951). Difficult to find a last one since is name has been misused by some fakers, maybe a Schoenberg / Webern in 1973.

George Szell (1897-1970)
This Hungarian  gave his first piano concerto at 10. Conductor of the Cleveland orchestra from 1946 until his death. His first recording was Dvorak’s 9th symphony. His last one was maybe Brahms’ Violin concerto with David Oistrakh. He was a great Prokofiev’s music interpreter.