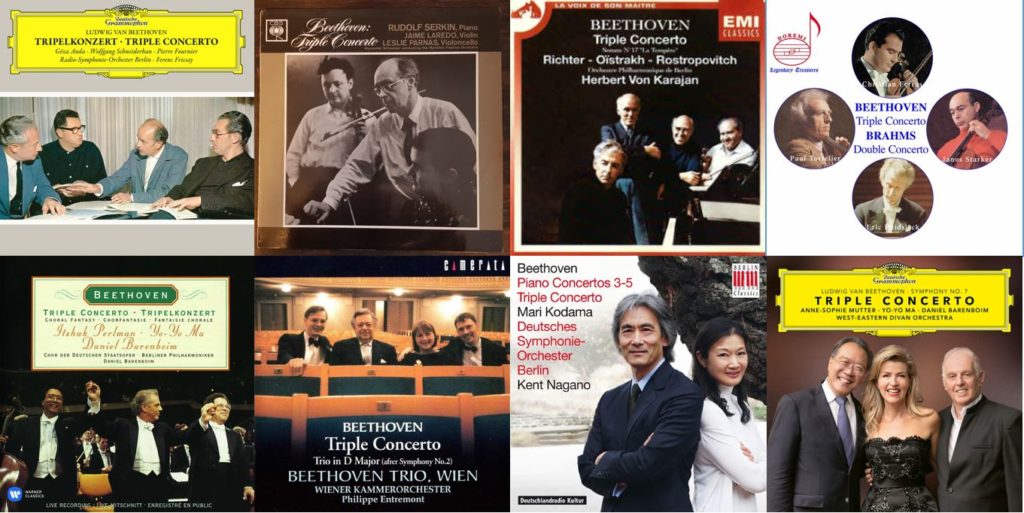 Another discography about one of my preferred works. For usual readers, don’t worry : no Kubelík here (though I have a live recording by him and the Trieste Trio (1973), not very good).

Two reasons : A very recent issue with Barenboim (live) and the controversial first recording by Karajan for EMI which I praise.

The first recording of the following 58 ones was made by Felix Weingartner in 1937. Recordings feature either famous soloists (Oïstrakh, Perlman, Saham… for violinists) either established trios. Some of them are conducted from the piano. Many symphonic orchestras in this survey, but one guesses they were in a “Mozart” format (except at least a famous one…).

There is a little cadenza in the first movement which always makes me think of a passage of Boieldieu’s Harp concerto (1800, Triple concerto written in 1803-1804).

I listened to the different versions without precise order for the 1st movement.

Martin West – San Francisco Ballet Orchestra – Claremont Trio – 2012
Martin West seems to be most known for his ballet conducting. Introduction not very lively, instrumentalists lack of character too. Rather pleasant though. 7

Daniel Barenboim – West-Eastern Divan Orchestra – Anne-Sophie Mutter – Yo-Yo Ma – Daniel Barenboim – 2020 (Live)
The orchestra is quite reverberated, rather dramatic introduction, accents, Ma lacks a little of body, but every one is well integrated in the musical flow. 8

Paavo Järvi – Frankfurt Radio Symphony – Gil Shaham – Anne Gastinel – Andreas Ottensamer – 2018
Naïve didn’t give the rights to Qobuz so I listened to it on Spotify in a lower definition. Conducted “à l’ancienne”, it is then rather dry and quite military, the trio, virtuoso, sounds exterior and mannered. 7

Herbert von Karajan – Berlin Philharmonic – David Oïstrakh – Mstislav Rostropovich – Sviatoslav Richter – 1970
Here it is. “Too much opulent”, “soloists don’t listen to each other” “orchestra and soloists just play apart” and so on… For sure it was a great marketing idea to gather these three Russian stars.
Wonderful and fierce introduction, wonderful instrumentalists event if I find Richter a little grey as usual. This version is not exterior at all, it’s even moving. Maybe the picture is too big and beautiful? 8.5
This is what Richter declared later on: “It’s a dreadful recording and I disown it utterly… Battle lines were drawn up with Karajan and Rostropovich on the one side and Oïstrakh and me on the other… Suddenly Karajan decided that everything was fine and that the recording was finished. I demanded an extra take. ‘No, no,’ he replied, ‘we haven’t got time, we’ve still got to do the photographs.’ To him, this was more important than the recording. And what a nauseating photograph it is, with him posing artfully and the rest of us grinning like idiots.”

Antonini – Kammerorchester Basel – Giuliano Carmignola – Sol Gabetta – Dejan Lazić – 2015
Same characteristics at the orchestra, a little more vivid but so square. A better cellist, but it’s prettier (the conception, not the playing) than taking. 7

Karajan – Berlin Philharmonic – Anne-Sophie Mutter – Yo-Yo Ma – Mark Zeltser – 1980
Recording less beautiful than the 1970 version for the orchestra. Superb Ma & Mutter, too much difference of perspective between the soloists and the orchestra. 7.5

Daniel Barenboim – Berliner Philharmoniker – Itzhak Perlman – Yo-Yo Ma – Daniel Barenboim – 1995
Live – Not a very good sound either, but it is taking, very lively (live), despite the orchestra and the sound, it sounds like chamber music. 8.5

Franzjosef Maier – Collegium Aureum – Franzjosef Maier – Anner Bylsma – Paul Badura-Skoda – 1974
So it was conducted for once from the violin. Except for the piano which sounds like an harpsichord, it is a pleasant lecture. 7.5

Kurt Masur – Gewandhausorchester Leipzig – Beaux Arts trio – 1994
Nice introduction. beautiful orchestra. The problem with an established trio is that they can seem to play apart on their own. 7.5

Szell – Cleveland Orchestra – Isaac Stern – Leonard Rose – Eugene Istomin – 1966
Live – The famous trio recorded it with Ormandy the year before. Introduction a little straight, as for the trio though it is well animated. Superb L. Rose. 7.5

Alexandre Rabinovitch-Barakovsky – Orchestra Della Svizzera Italiana – Renaud Capuçon – Mischa Maisky – Martha Argerich – 2002
Live – This is coupled with the best Schumann piano concerto I know (one of the worst one being Argerich / Harnoncourt…).
Beautiful introduction, but the trio seems to be on automatic gear. 7.5

Eliahu Inbal – Philharmonia Orchestra – Trio Fontenay – 1995
Inbal will have recorded it twice, as Karajan, Haitink, and three times for Masur (Barenboim twice also but live).
Orchestra OK trio also not much to say nothing special… 7

Philippe Entremont – Wiener Kammerorchester – Markus Wolf – Howard Penny – Christiane Karajeva – 2006
The best introduction so far in a chamber perspective, lively, animated and detailed. And it goes on, the music flows and you keep on listening. Best piano so far too. 8.5

Zurich Chamber orchestra – Schweizer Klaviertrio – 2018
No assigned conductor here. Not much vibrato, some bellows effects, it’s lacking of some engagement. 7

So I will keep these 11 versions :

Contrary to many compared listening I made, there are some recent versions kept.

Philippe Entremont – Wiener Kammerorchester – Markus Wolf – Howard Penny – Christiane Karajeva – 2006
The most evident Largo up to now. Beginning of the Rondo not too slow for once, then a little more animation, it would have been perfect. 8

Finally my preferred are:
Live: Barenboim II and Martinon
Studio: Karajan I and Entremont