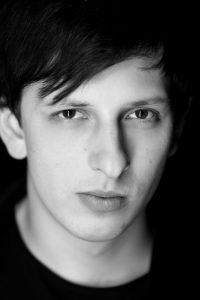 Having enjoyed his first CD (cf here [fr]) I had the opportunity to listen to him live at France-Amériques the other day and we decided to meet each other, too shortly I’m afraid.

Łukasz Krupiński was born in Warsaw 25 years ago. Though his parents weren’t musicians, they had a piano at home and he began playing at 5. Realizing that he was so sensible to sounds; they decided he would take private lessons. He is currently taking postgraduate lessons with Professor Arie Vardi at Hannover University of Musik, Drama and Media, Łukasz finds him “very inspiring”. He follows also many masterclasses (Jacques Rouvier in Salzbourg, Stephen Kovacevich in Oxford, Pavel Gililov in Leipzig and many others).

Having won last September the VII International Piano Competition in San Marino and all the Special Prizes: Music Critic’s Award, Audience Prize and Orchestra Award, he is among the finalists for the Busoni Competition which will be held by the end of August.

Łukasz isn’t bothered by his current situation: taking lessons, giving concerts and entering competitions. “I am lucky to be supported by the Beethoven Association in Cracow, whose founder is the President Elżbieta Penderecka (Krzysztof Penderecki’s wife) who also runs one of the biggest music festivals in Poland – Ludwig van Beethoven Easter Festival.
He has already many concertos at his repertoire: several Mozart, Beethoven 4, Chopin, Brahms, Rachmaninov 2, and Tchaikovsky 1… “I definitely want to learn the Scriabin concerto, which surprisingly is not that popular.”

His pianist idols are Shura Cherkassky, Vladimir Horowitz, Alfred Cortot, Sergueï Rachmaninov and Sviatoslav Richter.  For living pianists, he is a fan of Martha Argerich, Nelson Freire or Mikhaïl Pletnev. “I am particularly fan of Shura Cherkassky: one summer I listened to absolutely all his recordings”.
I was very interested by his frequent usage of the left pedal, not only in soft passages. “I guess Cherkassky did that a lot too. I think it gives more variety and different qualities in sound; though it is for me a rather spontaneous practice, I do not write it in the score! It depends on the kind of piano I get, the acoustics. And just recall that Clara Haskil sometimes used even different fingerings on the spot…”.

Łukasz Krupiński is a very busy pianist already. Besides the Busoni competition, he will be within next months in Montenegro, London, Salzbourg, Austria (Schumann’s quintet with the Szymanowski quartet), for September in Spain, Argentina and Uruguay or in November, Milano, Warsaw, Australia…

Dont’ miss his next recital!