We met each other during a quick lunch – this thirty-year-old pianist is as friendly as I imagined. I had already been conquered by his accompaniment of the violinist Elsa Grether, a recital in Gaveau on the occasion of the release of a CD Bach, and recently soloist and head of the Orchestre symphonique de Bretagne In two Mozart concertos.

A native of Lyon, he was born in a music-loving family, and was able to go often and very early to the concert (“around 6/7 years, the Farewell symphony by Haydn, and a shock towards 10 years with La Valse by Ravel! He began the piano from 4 years old, studied music at the Conservatoire de Lyon before joining the CNSMDP (14-18 years) and following the teachings of Bruno Rigutto and Hervé Billaut. “I was lucky that I was made to work rather than start too early in the career “(he will not perform in concerto before the age of 15.) He will receive at the famous International Piano Academy of Lake Como advices from Dmitri Bashkirov, Fou Ts’ong, Murray Perahia and Andreas Staier, William Grant Naboré and Malcolm Bilson.

Although he is not an great fan of piano competitions, he has appeared in and won many of them, starting with the Chopin Competition in Warsaw and the Queen Elizabeth one. “I had already started giving a number of concerts and it was sometimes complicated to block 15 days of my agenda to enter a contest, but these are somewhat mythical piano competitions. They certainly helped my career developing, especially the first gave me a certain Chopinese recognition.”

François Dumont is pleased with the development of his career, including alternating concertist, recitalist and chamber musician roles: “these three aspects enrich each other and allow to understand all the facets of a composer. Of course works’ maturation takes a lot of time, I have the chance to quickly learn the scores and to have a good memory.It is necessary for a new work to alternate moments of intense work and silence, then to return to it with greater profit.

“I always work on a new piece only from the score, but then I listen to the mythical interpretations to get an idea of ​​what could be proposed by the best: François or Perlemuter in the concertos of Ravel for example, Concertos that will soon be released by Naxos, where I am accompanied by the Orchestre National de Lyon conducted by Leonard Slatkin, but weeks before a concert or a recording I do not listen to any other interpretation so as not to be influenced .

“I think the halls should have their own piano, as it is the case at the Philharmonie – or a few years ago the wonderful Steinway by Claudio Arrau at La Chaux-de-Fonds. I recently choose a superb piano at a piano rental company, and then found it was tuned to 440 Hz, which was too high for the orchestra I was playing with, so it had to be ‘descended’ at the last moment … But if I had a wonderful piano on my own, I would not see myself taking it with me around the world like a Michelangeli or a Zimmermann … 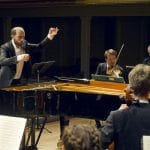 “I do not have the ambition – at least for the moment, to become a conductor, I only do it for the Mozart, Bach, Haydn concertos, perhaps for Beethoven’s first two. Conducting myself Mozart Concertos, although I also give them with profit with a conductor, provides many advantages: coherence on tempi, articulations, dynamics, style. One simply risks losing a little projection of sound  when the lid of the piano has been removed. Another advantage is that you by heart all orchestra parts, down to the smallest detail: it is in fact a bit like for the piano: to produce a desired sound by a gesture, For the Mozart concertos, I try to establish a dialogue between the piano and the orchestra, and the intimate and delicate passages are rather the prerogative of the soloist, as opposed to the vigorous orchestral tutti. This comes froms the baroque concerto, unlike the romantic concertos where the soloist competes with the orchestra in terms of sound power. But above all, it is necessary to maintain a musical flow all along and adapt oneself to the orchestra: each has its ‘latency’ in relation to the conductor’s beating: one must absolutely be able to adapt to it and be able to ‘marry’ it.

TV: Many instrumentalists or composers tell me about “moments when the current passes”.
FD: Of course I am very sensitive to them. A contrario I can sometimes be embarrassed by the coughers. Have you noticed that they cough rather willingly during very quiet passages? The human being is afraid of the void … I like the idea of the unregistered concert, its ephemeral side, although I am happy to find for example recordings of mythical concerts, such as the last recital of Dinu Lipatti!

Among the elders: Lipatti, Cortot, Schnabel, Serkin or Arrau, for the orchestra, Furtwängler, Carlos Kleiber and René Jacobs for the opera. Among the living, I have unlimited admiration for Lupu, Argerich, Barenboim, Perahia …

“Among the discographic projects, in addition to the concert cycle of Mozart with the Orchestre symphonique de Bretagne, the recording of the two Ravel concertos will soon be released at Naxos, as well as a Mussorgsky recital, Chopin’s Nocturnes and Schubert’s Trios with the Elegiac Trio, which was created more than ten years ago.

I will soon be in China for a concert tour, then in Texas for the two Ravel Concertos. In September, I will give a recital Bach at ‘Piano aux Jacobins’, retransmitted remotely via the Disklavier system to be illustrated at the same time by the dancer and choreographer Pierre Rigal. I will give this summer a program around the resonance at the Meije Festival, during which I will play Tristan Murail’s “Works and Days”