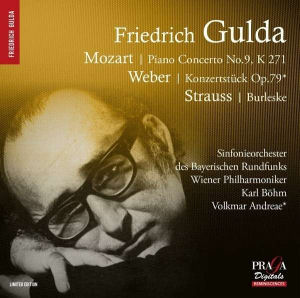 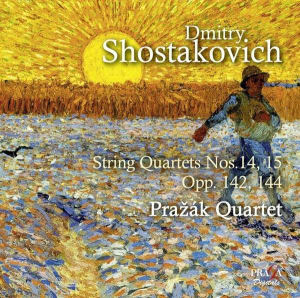 2 new PragaDigitals SACDs: a reissue by Friedrich Guldawith orchestra and a new record by the Prazak Quartet: the last two quartets by Shostakovich, recorded in May and June 2014.

Gulda, laying on the photo booklet (1930-2000) , with his thick glasses, Brendel style – suggests the kind of melancholy that emerges from these interpretations.

Mozart: evidence of the musical line in a classical style , without any affectatio , very good synchronization with the orchestra (probably a concert broadcast without public) . A real treat, even if the orchestra has a sound a bit overall . (Gulda played the 14th and Beethoven 3rd with Kubelík in the 50s ).

Weber; Volkmar Andreae (1879-1962) is best known for his complete symphonies of Bruckner, so original . Beautiful moments , but the work does not really triggers enthusiasm …

Strauss: it’s alive as can be – the affinities of Böhm with the music of Richard Straussare well known, great verve and enthusiasm in what appears to be actually a concerto for piano and timpani …
But as said the recording critics  » to be put away at Mozart . »

I was a little afraid that their last issue devoted back to their « tube » , the two quartets by Leoš Janáček , would be their last… Well no , here are the last two quartets by Dmitri Shostakovich ( 1906-1975 ). The Prazak Quartet had already recorded for PragaDigitals numbers 7 & 8.
These two quartets date from 1973 & 1974 . Of course , even in these later works, heir grammar is much simpler than the quartets of the second Viennese school or by Bartók ( the Livre by Boulez was begun before 1950 and Ainsi la nuit by Dutilleux will be created only three years later. .. ) , but it is music that has an undeniable emotional power .
With the Borodin , Beethoven, Taneyev, Fizwilliam, Pacifica, Danel, Brosky, St. Petersburg, Eder, Mandelring, Rasoumowsky, Debussy, Shostakovitch … versions abound now !

One can find more dark or more expressionist in the discography , but more rewarding and more instrumentally taking , I doubt it. It is as remarkable – and the works have in common – their version of the Last seven words by Haydn.

Note as an intermission 2 small transcriptions for string quartet , op. 36 , including a polka taken from Angel Fire , a great Encore for any string quartet …

Last movement of the 1th :