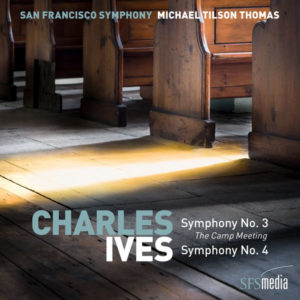 Michael Tilson Thomas is a specialist of Charles Ives: he recorded Symphony n°2 (1982) and Symphony 3 & Orchestral set n°2 with the Concertgebouw (1985), Three Places In New England with Boston in 1970, Holidays Symphony, The Unanswered Question & Central Park In The Dark with Chicago in 1988 and symphonies n° 1 & 4 with Chicago in 1991.

Though the hymns are superbly sung and Symphony n°3, rather classic and pastoral, is well paced, my favorite in this album is Symphony n°4.
About n°3, the sleeve recalls a controversial statement about Mahler considering conducting it :
“Two copies of the full score seem to have been made in 1911, one at the Tams copying shop in New York. That is apparently where Gustav Mahler, then the music director of the New York Philharmonic, happened to pick up the copy and found it interesting enough to take along on his imminent voyage to Europe. Details are a bit sketchy, but at least Ives seems to have thought that Mahler intended to conduct it.
Mahler died shortly thereafter, and that was the end of that intriguing possibility. Mahler and Ives might seem a surpassingly odd couple. And yet, on reflection, one can appreciate at least one
reason this score would have piqued Mahler’s interest.”

Symphony n°4, though composed between 1910 & mid-1920s, did not have a complete performance until Leopold Stokowski conducted it with the American Symphony Orchestra at Carnegie Hall on April 26, 1965, 11 years after Ives’s death. The complexity of certain passages, typical of Ives’s mixing different music layers needs at least two conductors which is the case here (Stokowski asked two conductors to help him for his recording: David Katz and Jose Serebrier).

The score comprises an important piano part and a chorus as well at the beginning and at the end (no text in the sleeve). I like the atonal 2nd movement “Comedy”, dreamy and exuberant almost at the same time. The 3rd “Fugue” sounds almost like a Mahler (again…) adagio. Maybe the 4th movement is the best, withe the same characteristics as the 2nd, sounds sometimes like Schoenberg’s music…

The 4th by MTT in Chicago was a very good recording, this one might be even better, for example in the 4th movement, taken quicker and let’s say more op. 6 than Gurre-Lieder…