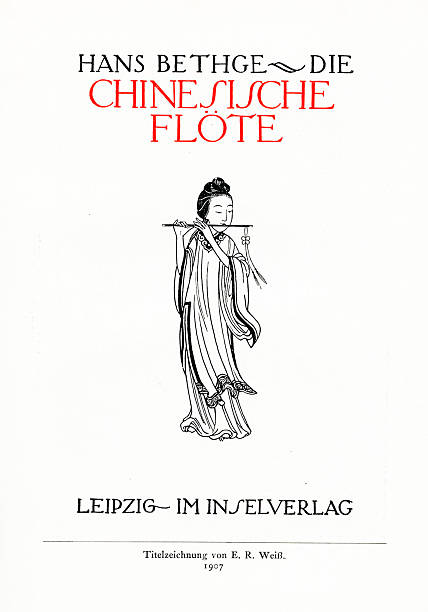 The sun departs behind the mountains.
In all the valleys the evening descends
with its shadow, full cooling.
O look! Like a silver boat sails
the moon in the watery blue heaven.
I sense the fine breeze stirring
behind the dark pines.
The brook sings out clear through the darkness.
The flowers pale in the twilight.
The earth breathes, in full rest and sleep.
All longing now becomes a dream.
Weary men traipse homeward
to sleep; forgotten happiness
and youth to rediscover.
The birds roost silent in their branches.
The world falls asleep.
It blows coolly in the shadows of my pines.
I stand here and wait for my friend;
I wait to bid him a last farewell.
I yearn, my friend, at your side
to enjoy the beauty of this evening.
Where are you? You leave me long alone!
I walk up and down with my lute
on paths swelling with soft grass.
O beauty! O eternal loving-and-life-bedrunken world!
He dismounted and handed him the drink
of Farewells. He asked him where
he would go and why must it be.
He spoke, his voice was quiet. Ah my friend,
Fortune was not kind to me in this world!
Where do I go? I go, I wander in the mountains.
I seek peace for my lonely heart.
I wander homeward, to my abode!
I’ll never wander far.
Still is my heart, awaiting its hour.
The dear earth everywhere blossoms in spring and grows green
anew! Everywhere and forever blue is the horizon!
Forever … Forever …

This is probably one of the most famous movements in the recording history. I wondered if it was still moving after 66 years … and yes, it is: a marvel of balance, construction, fluidity, beautifully played by the orchestra, including the famous Viennese oboe. Kathleen Ferrier is marvelous, the richness of her tone hiding her English accent. 9.5

Indications are even better respected than with Wallter, with less remarkable instrumentalists,  rather placid conducting. Good singing from Hoffman, but rather cold. 7.5

Superb animation at the beginning, voice sounds curiously old on some notes; with a not really pleasant vibrato. But the orchestra is superb all along and there is a lot of expression. 8,5

Ludwig is a little far away, but with a big volume, great style. It is the slowest heard for the moment – maybe too much in the fourth part, but there is always enough animation to let the music flow. 8.5

Slower, same tones from the orchestra as with Walter, but better recorded. Despite all his quality – and minor defaults (notes are too related) – I think it lacks of poetry but surely not of presence. Superb conducting. 8.5

A miracle, the best balance singer / orchestra, every single bar is filled with poetry – listen to the interlude, every part match so well with the others, and so ‘Mahlerian’. So expressive singing from Baker. 9.5 (and the best orchestra for Mahler with the Concertgebouw and Vienna).

A little more vibrato here, very good conducting as usual with Haitink, you just miss the magic of Kubelik, lacking of some accents. 8

A rather global rendering at the orchestra, lacking of accents too, but well animated. I love this voice. Altogether a very taking version. 8.5

Refined conducting, chamber like, the voice sounds a little small and does not have a great impact. 8

I just wondered if, on the contrary, a recording with 6 different singers could be envisaged… Wonderfully detailed orchestra, splendidly recorded (the best by far in this selection). Sensitive singing, beautiful voice and great presence. 8.5