First of all do not get confused with Hugues Dufourt and Denis Dufour, the last one, also a French composer, born in 1953, is close to the GRM (Groupe de Recherches Musicales – “electronic music”). Dufourt who interests us here has just celebrated his 70 years and is one of the main representatives of the French “spectral school” with Gerard Grisey and Tristan Murail.

Let’s quote him: “The music is then presented in the form of a homogeneous but worked harmonic texture, raised by a work of timbre differentiation […]. It is based, says Dufourt, on “a dialectical of timbres and time”. The concept of timbre includes all dimensions of the writing and is conceived, from computing, in the separation and the considered conjunction of frequency and intensity. The concerted relation of these two dimensions produces specific effects of iridescence of the sound material. That they are masses or small staff, the timbre is characterized by its pregnancy. It resists to transformation: freedom penetrates into it by insensitive gradations. »

The music of Hugues Dufourt does not give in the aphorism of Webern: the 2 works of this CD last approximately half an hour. From the IRCAM website: “As Philippe Albèra notices it, all the problems of such a thought are thus in its capacity to generate a form, to support one duration which is not dramatized, which comprises neither of the perceptible articulations, neither these moments of waiting able to make wish what will follow, nor even the surprises which accompany them.” This music thus diverts because it denies any external or internal reference for the listener. If it seems repetitive, but how much subtly, it presents sometimes kinds of explosions, which by reinstating the flow of the part appear only more striking. The “white Cypress” proposes an astonishing alchemy of timbres between the viola and the orchestra (let us note the beautiful eclecticism of the violist who also recorded theunforgettable Trio by Jerome Ducros). Surgir is even more impressive: a continuous flow and a bewitchment of timbres: that here is a personal music and a captivating universe! cf. last minutes of the part:

Inspired by frescos by Giovanni Battista Tiepolo painted in the residence of Würzburg, again two so rich universes of intoxicating sonorities. Let us quote the composer: “Nothing is more inclined to suggest space than color, which becomes the true mean of the musician”. Difficult to imagine two pieces as dissimilar as this Africa and this Asia. 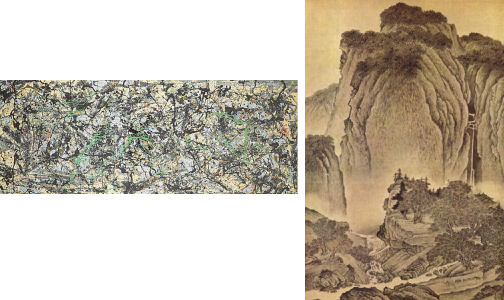 Again 2 works inspired by paintings, as different as they are. The first is a sort of black lava sea, like a black debussysme, perhaps a little long. The second (2010) is of an amazing sound refinement unheard-of, it is well this latter word which characterizes this music.